“Hope
Smiles from the threshold of the year to come,
Whispering 'it will be happier'...”
― Alfred Tennyson
Best wishes for 2014

A talk on the Economy, Business, and India’s 2014 Parliamentary Elections

A talk on
“The Economy, Business, and India’s 2014 Parliamentary Elections”
By

JOHN ECHEVERRI-GENT
Associate professor in the Department of Politics
University of Virginia.

Synopsis: India’s liberalizing economic reforms have been accompanied by the growing power of its business class.  At a time of rising inequality, the increase of business influence has been a matter of concern for many.  This talk will assess the implications of increased business influence for India’s elections and its economic policy.  It will argue that the problem of growing business power is less a matter of its growth and more a matter of the how it is exercised – in particular the manner in which illegal contributions have financed the continued viability of India’s dynastic political parties.  The presentation will begin by exploring India’s current economic challenges.  Then it examines the manner in which business has exercised its influence through India’s elections.  Finally, it will speculate about the likely consequences of the 2014 parliamentary elections for business’s political influence and India’s economic policy.
JOHN ECHEVERRI-GENT is associate professor in the Department of Politics at the University of Virginia.  He is author of The State and the Poor: Public Policy and Political Development in India and the United States and co-editor of Economic Reform in Three Giants: U.S. Foreign Policy and the USSR, China, and India.  He has written many articles in comparative public policy and the political economy of development.  His most recent publication is “Understanding India’s Response to the Global Financial Crisis: From Quick Rebound to Endless Slowdown?”  forthcoming in a volume to be published by the Brookings Institution.  He is currently completing a book-length manuscript entitled Politics of Markets: Political Economy of India’s Capital Markets.  He serves as treasurer of the American Institute of Indian Studies.
Posted by Bilimale at 7:43 AM No comments:

Dr. C. N. Ramachandran was my esteemed colleague at Mangalore University,  has taught English language and literature in various universities in India, Somalia, Saudi Arabia, and the U. S. Primarily a critic-translator, he has published both in English and Kannada. His works in English include: a study of British drama (Shifting Perspectives, 1986), and monographs on Triveni and Shivarama Karanth. Some of his works in Kannada include a novel (Shodha, 1978), Post-colonial discourse (Vasahatottara Chintane, 1998), comparative criticism (Taulanika Sahitya, 1996), and a study of 25 oral epics (Hosa Madiya Mele Chaduranga, 2007). He has translated many works from Kannada to English, the most ambitious being the translation of the Kannada oral epic Male Madeshwara ( 2001). He has presented papers in National and International Conferences held in San Francisco, Tokyo, Turku, Frankfurt, and New Delhi.

Let us congratulate him.
Posted by Bilimale at 7:28 AM No comments: 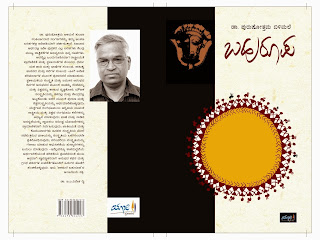 Bahurupa will be released on December 15th at BP Wadia Hall, Basavanagudi, Bangalore at 10.3o AM.
Posted by Bilimale at 6:37 AM No comments: 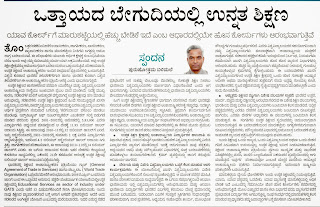 Noted Kannada Writer Na. D'Souza (Born: June 6, 1937) will be the President of upcoming Kannada Sahithya Sammelana to be held at Madikeri in January 2014. He is one of the most popular and best writer in Kannada, has got several awards in recognition of his contribution to Kannada literature including Karnataka Sahithya and Central Sahithya Academy awards. He was conferred honorary doctorate by the Kuvempu University. 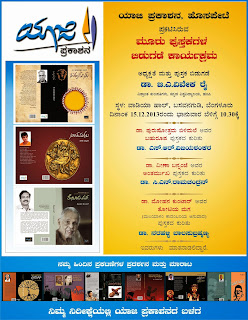 Posted by Bilimale at 2:39 AM No comments: