Katrin Binder, a doctoral scholar of Indology and currently teaching Kannada at Wurzburg University, Germany arrived in New Delhi on her way to Udupi in Karnataka, spent a quite evening of winter sharing her thoughts and experiences among some Yakshagana enthusiasts on 17 Dec 2011.
Read detailed report in http://www.kempukote.blogspot.com/
Posted by Bilimale at 11:39 PM No comments: 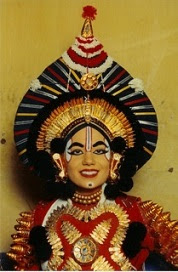 Cordially invite you to a special lecture by


Dr. Katrin Binder is currently teaching Kannada at Wurzburg University, Germany. She was a DAAD/ ICCR Fellow during 2001-2002 and has done an Intensive field work on ‘Abhimanyu Kalaga’. During 2008, she has submitted her Ph. D thesis on the subject “ Yakshgana Rangabhumi”

Dr. Katrin has learned and performed Yakshagana under Guru Sanjeeva Suvarna, at Yakshagana Kendra, Udupi. Her other areas of work are modern Kannada literature and drama, history of Basel Mission in Karnataka

Posted by Bilimale at 1:41 AM No comments: 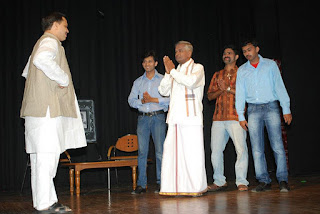 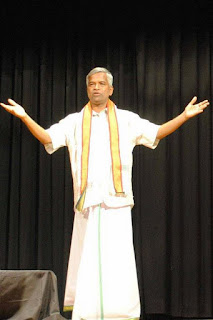 
Born on June 6, 1937, Na. D’Souza joined the Public Works Department as a second division clerk after his intermediate from the Shimoga Intermediate College. Though he worked in the government department for 36 years, it did not stop him from pursuing his interest in the literary field.


Mr. D’Souza has written biographies of Mother Teresa, Mudugodu Hirannyappa and Gopala Gowda. Significantly Mr. D’Souza has not confined himself only to his literary pursuits if his close association with several movements espousing the cause of the nature and environment in particular and public good in general is any indication.


It is poignant short novel written by Na. D’Souza for children. It is an extension of his earlier writings based on a submerged village. Five children Shridhar, Rajiv, Sudarshan, Keshav and Lingaraju, who are friends and studying at Malleshwarm High School , Bangalore decides to go to a village along with Shridhara’s grand father Sheshagiriraya. Actually It is journey from a city ( Bangalore) to a village( Hallimane). On the way to the village, children get an opportunity to see a forest, birds, a lake, fishes and even a crocodile. They also get a chance to travel in a boat and listen to short stories from Sheshagiriraya. Hence their journey to a village was never a boring one.

Interestingly children also decides to visit a local school which is in bad condition. After discussing with teachers, all five children decided to protest for which they got good support from local people including local press. The news reaches the concerned officers and they promised children to improve the situation.


Thus, this mini novel gives a strong message of city children returning to the nature. We may recollect that during these days, children are unable to design their outdoor activities during holidays. Research on children's preferences shows that if children had the design skills to do so, their creations would be completely different from the areas called playgrounds that most adults design for them. Outdoor spaces designed by children would not only be fully naturalized with plants, trees, flowers, water, dirt, sand, mud, animals and insects, but also would be rich with a wide variety of play opportunities of every imaginable type. But unfortunately the lives of children today are much more structured and supervised, with few opportunities for free movements. Their physical boundaries have shrunk. Parents are afraid for their children's safety when they leave the house alone, many children are no longer free to roam their neighborhoods or even their own yards unless accompanied by adults. Furthermore, children's lives have become structured and scheduled by adults, who hold the mistaken belief that this sport or that lesson will make their children more successful as adults.

However, differing from this stand, the novel suggests us that an environmental education needs to start at an early age with hands-on experience with nature. There is considerable evidence that concern for the environment is based on affection for nature that only develops with autonomous, unmediated contact with it. In their early years, children's developmental tendency towards empathy with the natural world needs to be supported with free access to an area of limited size over an extended period of time. It is only by intimately knowing the wonder of nature's complexity in a particular place that leads to a full appreciation of the immense beauty of the planet as a whole.

The author through this mini novel also suggested that natural outdoor environments have three qualities that are unique and appealing to children as play environments - their unending diversity; the fact that they are not created by adults;, and their feeling of timelessness - the landscapes, trees, and rivers. The novel also clarifies that children experience the natural environment differently than adults. Adults typically see nature as background for what they are doing. Children experience nature, not as background for events, but rather as a stimulator and experiential component of their activities. The world of nature is not a scene or even a landscape. Nature for the child is sheer sensory experience. Children judge the natural setting not by its aesthetics, but rather by how they can interact with the environment.

Posted by Bilimale at 6:31 AM No comments: 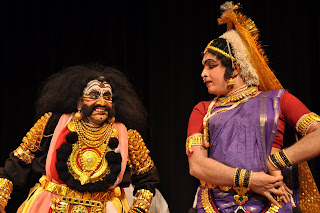 Posted by Bilimale at 9:50 PM No comments: